As I am typing out this post, I am watching the most amazing thunderstorm unfold from my front porch swing. It has been so ridiculously hot over the past few weeks that I was beginning to think that rain was becoming extinct. I was about to go all Tom Selleck on my garden, but luckily mother nature took care of the watering for me…free of charge even. She is a really generous and giving lady when she wants to be. Other times, a total bitch. But, so am I. At least we have something in common.

Because of the heat we are experiencing in Kentucky right now, it seems that everyone is in a bad mood. Tempers are short and fun evenings at home quickly turn into not so fun evenings over nonsense (my 4 year old had a meltdown over the couch not being soft enough). If you have kids, you can relate. Even if you don’t want to admit it.  On these kinds of nights, no one wants to cook and ordering pizza seems like the easiest way out and the quickest way to bed. But since I still have those post baby thighs, and a wheat allergy, pizza is the last  thing I need.

Thursday is grocery day in my house, and usually by Tuesday, I really have to start being creative with my cooking in order to stay within our modest grocery budget. And by being creative, I mean working some sort of miracle in the kitchen that can pass for food and that 3 out of 4 (the oldest kid doesn’t eat anything, ever) people in the house will eat it.

I ate all of the cherry tomatoes while I was using one of those websites that will try and make a meal for you out of the items you type in. Yeah, that didn’t work.

So basically, I busted out the griddle and began frying everything that could be fried, hoping I could put it on top of the spinach and call it a salad.

And then my 4 year old made a sandwich out of the fried things, and the rest was history! He insisted that cooked plantains look like slugs, so he named his creation “Slug Sandwich”. BEST DAY BEFORE GROCERY DINNER EVER.

Fry the bacon, set aside on a paper towel to absorb grease

peel and slice the plantains longways

fry the plantains until slightly brown

break bacon strips in half

add a plantain on top of one of the pieces of bacon, and add another piece of bacon to the top and press down slightly

put on some spinach. Or don’t. Super tasty either way. 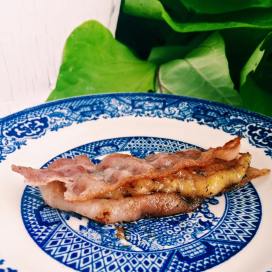